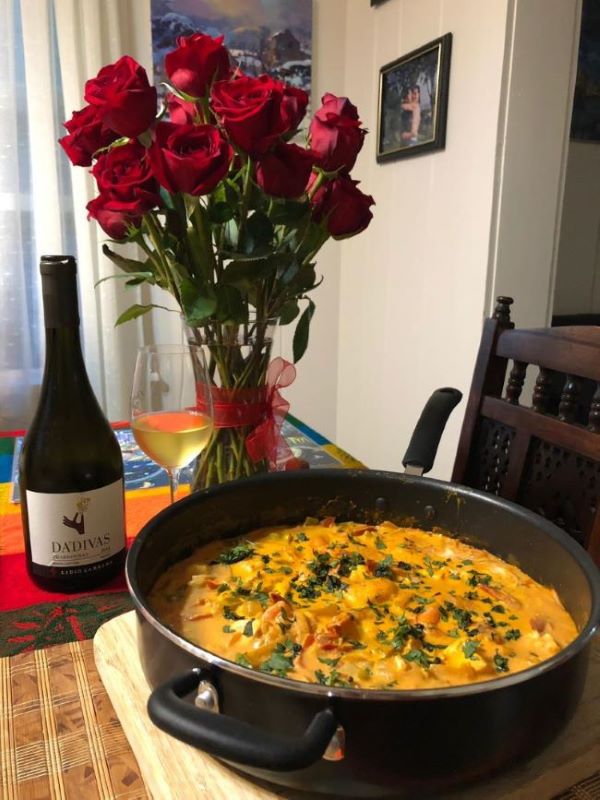 This month’s wine pairing theme has everything that makes us geek out. Emerging wine region? Check. A new culinary adventure? Check. New ways to think about economic development? Check.

When we started research for this post, we knew what everyone knows. Everyone wants to visit Brazil for its beauty, from cultural and ecological diversity to food, football, and of course, carnival, one of the world’s greatest parties. We also love wine tourism and telling the stories of great places to visit, especially when stories in the news seem all too often to emphasize crisis.

We dreamed of visiting wineries, large and small, seeing some of the thousands of two-hectare family farms that produce wine grapes. We read about Bento Gonçalves where wine tourists can visit wineries by, we kid you not, steam train. There’s live music, theater, food, and then something we’ve only seen in China: an “epic” culture park with historical reenactments and wine education, this time with a story about 19th century Italian immigrants.

Alas, this wine tourism would only be virtual, so we stuck to the wines we could buy on short notice in the US. That meant very few choices, all from the Serra Gaúcha region that produces most exported Brazilian wine.

As you might expect, the vast majority of Brazilian wine grapes are grown in the South, near the same latitude or slightly north of wine regions in Argentina and Uruguay. This means far from the Amazon and the equator, with the best wines at relatively high altitude. Not unlike its neighbors, Brazil’s colonists brought the first vines in the 16th century, but wine wasn’t really feasible or widespread.

Fast forward to 1875. Like many Serra Gaúcha producers, the Carraro family joined thousands of Italian immigrants to the Americas in the late 1800s. For almost a century, they were grape farmers who made a bit of family wine. Then, in the 1970s when big companies like Moet & Chandon started to invest in the region, the Carraros shifted to commercially popular vitis vinifera grapes like Merlot. The wine world was changing, but folks still mostly produced an everyday wine for the local market. In the 1990s, when free trade agreements brought a flood of affordable wine from Chile and Argentina, Brazilian producers had to adapt. This meant technology, innovation, and international training in viticulture and enology. Now, of course, there are plenty of great wines and a stronger effort to promote them.

So, we were excited to try a Lidio Carraro wine, and even more so since it was the only one we could find online. We chose the 2014 Dádivas Chardonnay ($18.99 at wine.com), which we rightly trusted to be quite good. The only other available Brazilian wine was their red blend, which also looked great, but the $58.00 price tag was well beyond our budget.

But wait, we found more, on a detour driving back home from Seattle. We stopped by Total Wine and More around 9pm, and went straight to customer service:

Cynthia: “Do you have wine from Brazil?” (Well, we knew, but we went undercover to see how the conversation would go).

Staff (speaking through her headset mic): “Josh, do you know if we have any Brazilian wine?”

She walked out of the booth, smiling. “Well, we do have one thing. I have some very inexpensive sparkling wine. Follow me.”

She walked us over to the section with all the, you know, very high-end sparkling wines: Cooks, Yellow Tail, and Andre Cold Duck. Our Brazilian sparkling wine was the cheapest of all, at $4.47, only matched by Andre. So, curiosity mixed with trepidation, we pulled out a $10 bill for two different bottles (dry and off-dry). We had read that sparkling wine is the next big thing coming out of Brazil and that the wines would remind consumers of a country famous for its carnival: fresh, fruity, easy-drinking. According to Wines of Brasil, “Labels made in Brazil are cheerful, young, authentic, focused on people who look for a happier life and are eager to have new experiences. That’s why Brazilian wines are the face of Brazil.”

So, we had wine and we needed food. We had invited our close friends and regular wine pairing guinea pigs, Anaid and Luis, when we learned that a new Brazilian colleague was just arriving in Tacoma. You know when you welcome a new person and you make your best local recipes to highlight what’s great about their new home? Yeah, that’s not what we did.

Pierre: “Isn’t it kind of weird to invite someone from Brazil and make Brazilian food we don’t know how to make?”

Cynthia: “Well, yeah, but I figure, if we moved to a new country and someone wanted to make me hot dogs and macaroni and cheese, I’d think it was great!”

So, we warned our guests and set out to choose recipes. We wanted something feasible, ideally somewhat healthy, and dishes that wouldn’t clash with the wine. Luckily, seafood is common throughout Brazil and we found scores of recipes and stories from Brazilian food writer, Fernanda Bocconi at saborbrasil.it.

We got beautiful scallop shells for free and great ingredients from our local fishmonger, Northern Fish Company, so the starter was much easier than we feared.

Better yet, our guests enthusiastically requested more of the shockingly affordable sparkling wine! People always like bubbly, so we had some hope, but the Alma was as good or better than a typical $10 bottle, so it’s likely to make an appearance at a holiday potluck in our future. The sigh of relief boded well for the off-dry version we were saving for dessert.

Next up: Moqueca seafood stew and Dádivas Chardonnay

Moqueca, we learned, is a classic Brazilian dish, with variations across the country. Our guest tells us it’s spicier in Bahia, saltier somewhere else. (Ok, in retrospect, we should have offered salt at this point, but we’ll never know if that was actually a subtle hint from a gracious guest.)

In any case, this Moqueca is astoundingly easy. A firm white fish (we chose halibut), some prawns, green peppers, onions, coconut milk, and a tablespoon of red palm oil. Oops, ok so that part is only easy because we lived in Senegal and we needed some sustainable red palm oil anyway. The internet suggested substituting olive oil, but the red palm oil is very much worth it. You have probably heard palm oil horror stories, the hidden “vegetable oil” ingredient in many processed foods and cosmetics. It’s responsible for significant deforestation and orangutan habitat loss, especially in southeast Asia. We bought one produced in Ghana, where significant areas of cultivation are certified sustainable. There, palm trees are indigenous and the tradeoff is between palm and other cash crops on already cultivated land, rather than rainforests.

So, we were excited to try a new recipe with ingredients we knew we’d like. Anaid didn’t even add spice, though that might change once we try the Bahia version. In any case, this one will definitely become part of our regular meal rotation and the bright, fruity, Dádivas Chardonnay was a perfect match.

For dessert, we’d read that red wine Sagu (Brazilian tapioca pearls) is served in every restaurant in Serra Gaúcha, so we were excited to try it. Plus, we have tapioca pearls for Pierre’s favorite Vietnamese desserts, so the dish is ridiculously easy.

Pierre: “Woah, it smells like the marché de Noël!”, referring to the Christmas market in his hometown of Toulouse. “I almost want to add an orange.”

Cynthia: “Go for it! We didn’t get the optional prunes and it’ll go great with the cloves and cinnamon.”

Our Brazilian guest (two hours later): “Sagu! I love Sagu. I’m very excited to have it! … What’s this? An orange?”

While her tone was 100% positive, we inferred that the orange was slightly blasphemous. Still, sagu is excellent, even for Cynthia, who doesn’t usually choose tapioca pearls. We also learned that the dish is typically much less thick than the fruit preserves texture we had achieved. This is where the instruction, “add water as needed” really only works if you’ve eaten the dish before.

Finally, we paired our semi-dry sparkling wine with an unexpected gift, a thick jelly paste, made from quince fruit, and best served with goat cheese. This one is from Argentina, but our resident expert confirmed there was a similar product in Brazil. We didn’t have cheese this time, but Pierre was already slicing servings, eyes wide, saying “you can always make me happy with this sort of thing.”

Again, we were very happy with the sparkling wine, and even happier with the gracious company.

We are so grateful to Susannah of Avvinare for hosting this month’s Wine Pairing Weekend and giving us a reason to have this much fun exploring Brazilian food and wine. Read her invitation here.

If you’re reading this early enough, join in the live Twitter chat – Saturday, September 14th at 8am Pacific time. Follow hashtag #WinePW; and be sure to add that hashtag to any tweets you post so we can see it. Here’s what the Wine Pairing Weekend group is sharing.